Warning: Cannot assign an empty string to a string offset in /home/tdarnold/public_html/imaginationmarketingsystems.biz/wp-content/themes/localthemepro/library/metaboxes.php on line 462

Warning: Cannot assign an empty string to a string offset in /home/tdarnold/public_html/imaginationmarketingsystems.biz/wp-content/themes/localthemepro/library/metaboxes.php on line 530

Warning: Cannot assign an empty string to a string offset in /home/tdarnold/public_html/imaginationmarketingsystems.biz/wp-content/themes/localthemepro/library/metaboxes.php on line 609 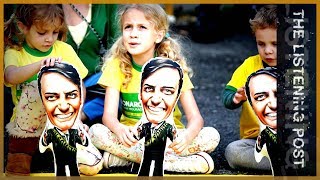 Brazil’s far-right presidential candidate Jair Bolsonaro has been described by some as Donald Trump meets Filipino President Rodrigo Duterte – and like them, he has turned the mainstream media into his useful enemies.

Bolsonaro has a 10-point lead in the polls in a country whose traditional parties have been stained by scandal. A populist outsider has moved into the political vacuum.

“It’s no accident that he (Bolsonaro) is leading in the polls,” according to Gisele Federicce, editor of Brasil 247. “He’s not the frontrunner by chance. He’s a candidate who’s very strong on Whatsapp, on social media. People get a lot of feeds, lots of videos from Bolsonaro.”

Brazilians aren’t merely on social media. They are, to an unusual degree, involved. The Facebook numbers there are through the roof. And when polled recently on whether they had used social media as a source of news over the past week, two out of three Brazilians – 66 percent – said yes. That’s more than twice as high as Germany, almost 50 percent higher than the US.

TV is still important to Brazilians but the flow of information about the election is much greater on Whatsapp.

Brazil is Facebook’s third-largest market and more than half of the population there is on Whatsapp, where Bolsonaro has an edge over other candidates.

“TV is still important to Brazilians but the flow of information about the election is much greater on Whatsapp,” says Ygor Salles, social media editor at Folha de Sao Paulo.

When Brazilians talk about the media establishment, they’re talking about Globo TV.

It’s the biggest media company in Latin America, hugely influential and the bane of the Brazilian left, because it’s conservative and has traditionally played the role of political kingmaker.

Right-wing candidates have always courted Globo, but Jair Bolsonaro didn’t bother, knowing he was too far right for the network’s taste and betting he didn’t need the network.

He hasn’t taken part in any televised debates since last month’s stabbing, saying he couldn’t because he’s still recovering.

Not everyone believes that.

“He preferred not to appear on the debate aired on Globo … because he knows that he could make mistakes and expose himself to attack from his opponents, especially given his controversial proposals,” says Salles.

The final debate of Round 1 took place this past Thursday – three days before voting day. And again, Bolsonaro was a no-show.

While his opponents were debating each other on Globo, he did an interview on a rival network, which then revealed it was backing him.

Before calling it a night, though, he spent a little time on Facebook Live talking to his supporters on the device that has driven his campaign, changed Brazilian politics and the way it is covered. His phone.

Please Complete The Form Below